The name of John Alvey Turner has been associated with the supply of musical instruments for over two hundred years. The founder of the business, whose full life story is now lost in the mists of time, opened his first shop in the City of London around 1790. His association with the City continued for many years, and it is recorded that he was a member of the Worshipful Company of Musicians and a Freeman, without which qualifications in those days he would not have been able to carry on business there. In the early days (banjos not yet having been invented) he is on record as an importer of “Italian Strings” which included violins and ‘cellos from famous Cremona makers such as Stradivari and Guarneri.

By 1860 it is safe to assume that the original Mr Turner had passed on, but the business was still in family hands and operating from premises at 19, Poultry, near the Bank of England. A label that survives from this era lists the products as “Italian Strings, Harmoniums, Concertinas, Organ Flutinas, Cornets, Accordions, Vuillaume Violins, Violas, Violoncellos, and Resin etc.”. (Vuillaume was a notable 19th Century French manufacturer of stringed instruments.)

In 1871, the London Commercial Directory listed John Alvey Turner as a “Musicseller” with premises in Leadenhall Street. By the time the 20th Century came round, the business had moved to a shop in Crosby Hall, at 35, Bishopsgate. Crosby Hall was one of the more famous survivors of the Great Fire of London, with historical connections to Richard III (whose London palace it was), Sir Thomas More and the Gunpowder Plot. Around this time, JAT was also well-known as a music publisher, and included in their catalogue were many arrangements for guitar of works by Mendelssohn and other contemporary composers which were almost certainly performed at the concerts that JAT sponsored in the auditorium within Crosby Hall itself.

The banjo had appeared on the scene by this time, and a price list still exists showing the Bishopsgate address and another shop at 39, Oxford Street, W. This must date from before 1908, when Crosby Hall was dismantled stone by stone and moved to Cheyne Walk, Chelsea, where it stands to this day, now incorporated in a millionaire’s Tudor mansion!

It was just prior to this, in 1907, that John Alvey Turner first published the magazine “Keynotes”, joining the earlier-established “BMG” as essential reading for the growing number of banjo, mandolin and guitar enthusiasts.

In 1926, John Alvey Turner moved again, this time to the premises at 68, New Oxford Street, and Max Butler joined the business to help out his aunt, who was the last member of the Turner family to be actively involved. Between the First and Second World Wars, JAT supplied instruments to, and was associated with, all the famous players of fretted instruments of those days, including Joe Morley, Bernard Sheaff, Mario de Pietro, Eddy Peabody, Len Williams, and Roland Harker. Later Julian Bream and John Williams joined the long and illustrious list of musicians who performed in concerts sponsored by John Alvey Turner.

On Max Butler’s retirement in 1976 Doug Parry acquired the business that still flourishes after two centuries, although it is now largely an internet and mail order operation.

In 2007 Doug Parry himself retired, although he continues as a consultant and luthier to the new proprietor, Phil Alexander. The emphasis on fretted instruments, now over a century old, continues, and John Alvey Turner continues to provide quality instruments to some of the greatest names in country, jazz and folk from all over the world.

The guitar equivalent of a “barn find”, this guitar almost certainly dates from the 1930s. It is a 16” wide flattop with a dark stained spruce top with a wide ivoroid soundhole rosette, ladder and fan bracing and walnut back and sides. The 12-fret neck is mahogany with a slotted peghead and ebony fingerboard. There is a replaced floating bridge and trapeze tailpiece. There is no maker's name but it bears the JAT stamp on the heel. It is a great sounding instrument. We have no provenance for this curious and possibly unique guitar, but it looks English and the high quality workmanship points to a professional luthier or small company having made it.

Subsequent research has revealed another guitar, this one known to have been made by J.G. Abbott, Snr. This one has a sunburst finish, with a different soundhole inlay and peghead shape, otherwise it is pretty much identical to the above guitar. Sadly there is no description or history with the picture, but it is safe to assume that it was made in the early '30s. You can find more information here GYPSY JAZZ UK

JAT would like to hear from anyone who can shed a bit more light on this relic from the JAT past. Use our contact page here to get in touch 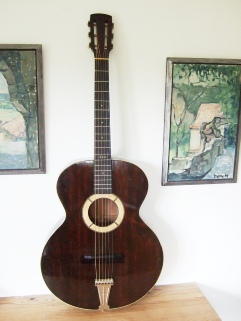